‘Place Ettoute’ is a popular square in Blida, located centrally at the south-west end of the city’s main Boulevard El Aichi ex Trumlet at the time of the French occupation.  With Bab Essebt to the north, Kawther Mosque and Bab Errahba to the south, Rue d’Alger and Bab Edzair to the east; and Lycee Ibn Rochd and Jardin Bizot  to the west, Place Ettoute lays right in the heart of the town. 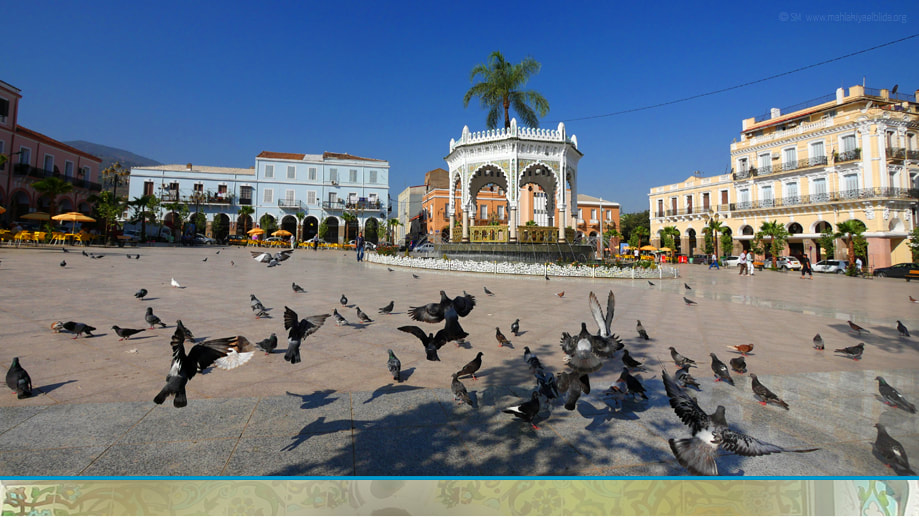 PLACE ETTOUTE: The iconic Blida's main square
The iconic square encompasses the distinguished white Moorish designed kiosque - bandstand - which sits majestically in the centre of the square. It is one of the main features of ‘La ville des Roses’. It is now a pedestrianised square, but it was the place where the first Mosque of Blida ‘Djemaa Sidi el Kebir’ was built.
​
Blida has always been known for its legendary white bandstand of ‘Place Ettoute’ and after the latest renovation that took place in 2017 the square is back to the forefront of being a recreational open space where people can a have a leisurely walk and enjoy the ice cream in an ambient and friendly surrounding. ​The square that surrounds the bandstand is famous for its cafes and ice-cream parlours like the famous Sicsiko, café Andalusia and Qahwat (Cafe) Challane. 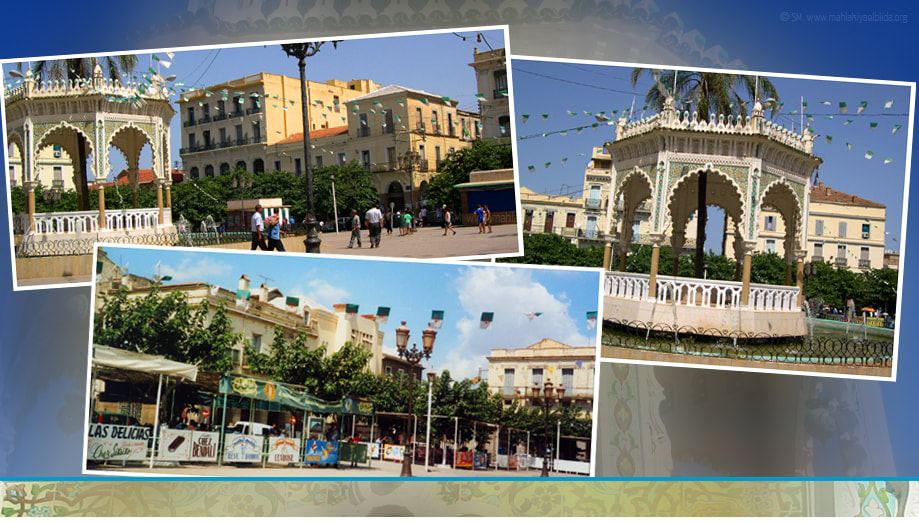 TWENTY YEARS AGO: The memorable features of the square with Cafes, ice cream parlours and the two newsagents kiosques
​The ‘Place Ettoute’ of so many decades ago is still the same today. These wonderful buildings and cafes are still
part ​of the décor of the popular square in the city.
Moreover, it includes the ‘Salle Mohamed Touri’ ex Capitol cinema and  ‘le circle’ - the café of the city leading football club ‘el Djamia’ of USMBlida football club. Part of the square décor as well is Mauguin, the famous ‘impremerie’ (print house) which is part of Blida’s heritage. Nearby La Mairie (local council), and the renowned photography shop of Takarli.  Previously, there was also two newsagents ‘kiosques’.

​The prominent ‘Kawther Mosque’ one of the biggest in Algeria sits in the back drop - south west of the square while in the north of the square there used to be what was known as 'les galleries' – a local supermarket. The ‘Place Ettoute’ of so many decades ago is still the same today. These wonderful places are still part of the décor of the famous square in the city.
​
The square is very much cherished and admired by the local people, so much so that ‘La bataille des fleurs’ a yearly event celebrating the flowers of Blida and its surrounding areas, used to end its festivities with a touch of music at Place Ettoute

ENJOYING ICE CREAM AT THE SQUARE
Cafes and ice-cream vendors like the famous Sicsiko, and the cafe Andalusia are part of
the square history and day to day life

The square of ‘Place Ettoute’ was known for having so many public services and administrative offices during the time of the French occupation. Hence, ‘Place Ettoute’ means 'place de toute les administrations’ (the place of all administrations). It was surrounded by ‘la mairie’ (local council), bank, offices etc.  Later the place was renamed by a diminutive word ‘Place Ettoute’ instead of ‘de toutes ‘ and this has become the popular name for the place.  However, some still think the name was related to the mulberry tree. 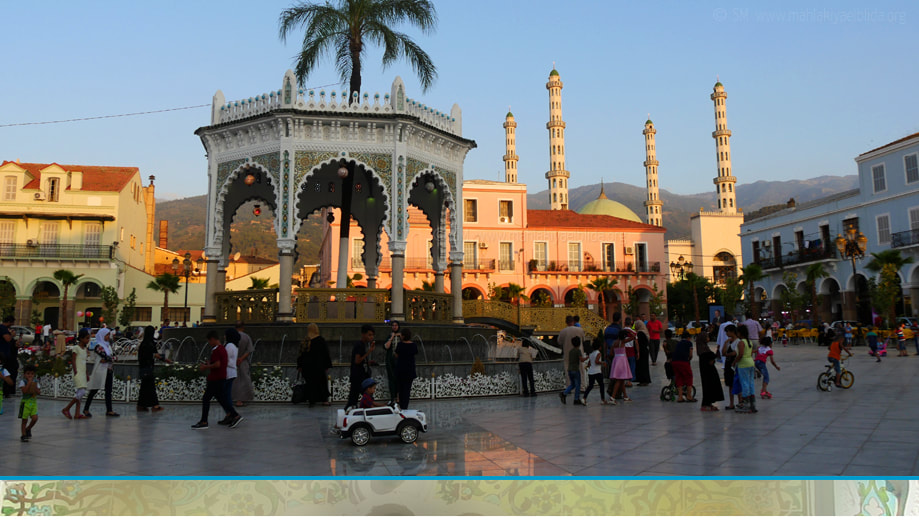 AT SUNSET: Al Kawther Mosque sits majestically in the backdrop of the square

It is within this area of the square; in the 1530s that Sid Ahmed el Kebir built the first Mosque in Blida, Djemaa Sidi el Kebir. This Mosque was demolished by the French in 1840s as part of  changing the area upon their occupation of Blida.

1867 the place was full of tents giving shelter to the residents after the devastating 1867 earthquake that hit the town.

In 1870, ‘Place Ettoute’ was only a large space where the French soldiers played ‘jeu de Paume’ a kind of tennis without racquet, it was popular game at the time. The soldiers will take part for hours in playing and this was disturbing the French colonists who used the space to walk around.  The Municipality (local council) built then a water basin in the middle to discourage the soldiers from playing.

A year later in September 4th, 1871, a Mulberry tree (arbre du murrier) was planted nearby Café Laval (where L’ hotel Orient was situated), now it is ‘le circle USMBlida’ and café.  The mulberry tree did not live for long before it was replaced by a popular tree (arbre peuplier) which was planted in the middle of the basin which in turn didn’t survive.

OLD PLACE ETTOUTE: The square and the kiosque-bandstand- went through several renovations in the past
1871, during the first French Republic and under the municipality of le Maire Fourier, the first palm tree was planted in the middle of what is now the square. It was called by the French ‘L’arbre de Liberte’- ‘the tree of freedom’.  For the autochtone population who were under the French occupation it was ‘L’arbre Sacree’ - ‘The holy tree’ as it was within this area of the square  where Sid Ahmed el Kebir built the first Mosque in Blida.
​
In early 1900, a bandstand in wood and in a Moorish Andalusian designed was built around the palm tree.
'La battaile des fleurs' a yearly event celebrating the flowers of Blida and its surrounding areas, used to end its festivities with a touch of music at 'Place Ettoute'
Under Alexandre Mauguin’s municipality (1881 - 1901), a wooden bandstand (kiosque de musique) was built around the palm tree. According to some records, the wooden bandstand was not built permanently but erected as when it is required for the different festivities.

In 1910, under the municipality of le Maire Berard, a small round water basin was built around the bandstand which sits on a decorative rocky and pebbles rocaille; and the palm tree.  Since numerous renovations have happened.

In 2000 and under le maire Hafsi, the bandstand was renovated by expanding the water basin and adding a green round space with different local flowers.
​In 2017, the famous and iconic ‘Place Ettoute’ saw some major renovation.  This latest restoration and design has revived the square and Blida as a whole. It has again offered the local population a place of leisure and rest just as it was previously.

* Old Black and white photos/postcards of Place Ettoute are not the art work of Mahlaki ya el Blida.  The credits for the photographs belong to the artists/ photographers and publishers. Mahlaki ya el Blida is only presenting the photos with the aim to portray the historical visuals of the subject.